Grieving father called for removal of ‘disgusting’ game that allows users to play the killer in a school massacre. 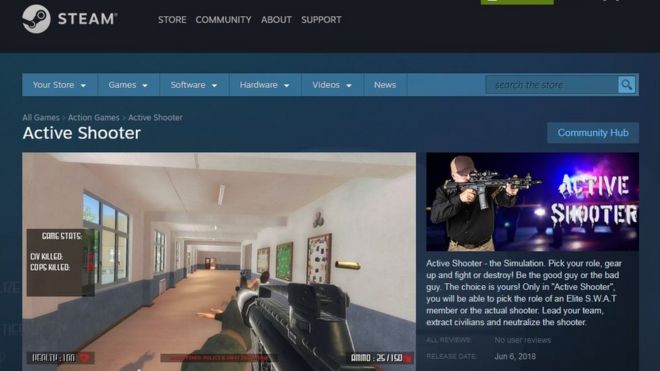 A video game that simulates a school shooting incident has been labelled “disgusting” and “despicable” by parents of children who died during the mass shooting at a school in Parkland, Florida, in February.

Billed by its Russian publisher, Acid, as a swat team simulator, Active Shooter invites players to take on the role of an armed officer responding to a school shooting. However, the game also allows users to play as the shooter or as a civilian attempting to escape the scene.

Using a first-person perspective, similar to shooters such as Call of Duty, Doom and Counter-Strike, the game looks to be entirely set within a school. Screenshots released by the developer and seemingly taken from the perspective of the shooter show swat team officers and students being gunned down in various locations including a gymnasium, corridors and canteen.

The game was set for release on Steam, the largest digital store for PC games with more than 125 million users. It has drawn a barrage of criticism.

Ryan Petty, whose daughter Alaina died in the Parkland shooting, released a statement via Facebook asking people to petition Valve, the company that runs Steam, to remove the game from its service. “It’s disgusting that Valve Corp. is trying to profit from the glamorization of tragedies affecting our schools across the country,” he wrote.

The father of another Parkland victim, 14-year-old Jaime Guttenberg, has urged consumers to boycott the game in an emotional series of tweets. Fred Guttenberg wrote: “I have seen and heard many horrific things over the past few months since my daughter was the victim of a school shooting and is now dead in real life. This game may be one of the worst.”

In response to the criticism from parents of real-life school shooting victims, and an online petition opposing its launch which had attracted more than 180,000 signatures,

It also drew the ire of Florida’s senior senator Bill Nelson, who called it “inexcusable”, adding that the developer should be “ashamed”.

Steam’s owner, Valve, said it had dropped the game because its developer had a history of bad behaviour.

Valve subsequently emailed the media to say it had taken action ahead of Active Shooter’s scheduled 6 June release.

“This developer and publisher is, in fact, a person calling himself Ata Berdiyev, who had previously been removed last fall when he was operating as ‘[bc]Interactive’ and ‘Elusive Team’,” said Valve in a statement.

“Ata is a troll, with a history of customer abuse, publishing copyrighted material, and user review manipulation.

“His subsequent return under new business names was a fact that came to light as we investigated the controversy around his upcoming title. We are not going to do business with people who act like this towards our customers or Valve.

“That was bad sarcasm on my part. Sorry, but English is my third language,” it said in a post to Steam’s discussion forums, which remains online.

Elsewhere, the publisher accused the media of “twisting its words” and claimed it was “absurd” that people were petitioning for the product to be banned.

In particular, it drew attention to the fact that other mass shooting-themed titles had sold via Steam for several years.

“Games like Hatred, Postal and Carmageddon are literally about mentally unstable people slaying dozens of people,” it posted.

“You cannot simply say OK to one and not OK to another.”

President Trump is among those who have previously suggested that violence in video games could encourage real-world attacks. But making such a link is controversial and games industry leaders deny there is evidence to support it.

Even so, the organiser of the Change.org campaign against Active Shooter has celebrated a ban in this instance on the grounds that school shootings should not be depicted for entertainment.

“We’re all in this together – standing side-by-side with those who have lost family and friends in school shootings,” posted Stephanie Robinett.

If you’re looking for the omega American road trip then you’ve got to hit the Mother Road, otherwise known as Route 66. From Chicago to LA, it’s a journey that’ll provide the experience of a lifetime, showing you the heart of a great nation.

Start in Chicago & Chase the Sun

In reality, the best always head west. Would you rather end the trip in the Windy City, or just in time to catch a gorgeous L.A. sunset on the beach? There’s just something deeply spiritual for folks when we head west. It becomes an adventure. It becomes a vehicular voyage to the sea. Here are some of the highlights you can expect in order:

• Illinois: It’s a pretty straight shot through the state from Chicago through Springfield (which has some stretches of restored Route 66) and southwest to St. Louis. There’s a bit of the bright lights of big cities, but also a good calm stretch of rural to cruise through as well; vast fields of corn and farmland for close to 300 miles.

• Missouri: Once you hit East St. Louis you’ll again be greeted by sky scrapers, industrial areas and the mark of modernity but then it’s another SE straight shot through the entire belly of the state.

• Kansas: You’re only going to spend a little time in the good’ol Kansas heartland. And by little we mean a whopping 14 miles far down in the bottom south east corner. You’ll go through two towns: Galena and Baxter Springs but rest assured there’s great classic restaurants and places that’ve been open as long as Route 66 has been around. In fact, it’s because of road tripper like you just passin’on through that keep’em goin.

• Oklahoma: You’re going to go through two huge metropolises that have “country” written all over’em: Tulsa first and then into Oklahoma City before heading directly west towards the Pan Handle. Of all 8 states, it’s here that they take Route 66 the most seriously. It’s got the most preserved still-drivable miles and you’ll be able to see the remnants of Kiowa, Apache and Comanche Native American land. And, you’ll get to take the same route as families long ago in the Dust Bowl took to escape.

• Texas: You’re going to go through the upper tip of the Texas Pan Handle that takes you through Amarillo. It looks short on a map but the 200-mile stretch of plains is a sight to behold like none other. If you can time it so you cut through here in the afternoon on a sunny day your spirit will be recharged. Just try not to pay any attention to all the truckers!

• New Mexico: Welcome to the Land of Enchantment where you’ll pass through Sun Belt city and Albuquerque. These days, it can be a bit challenging to stay strictly on the old road but with all the sandstone mesas and pine forests it’s definitely worth it.

• Arizona: In Arizona you’ll stay in the northern plains rather than heading down into the really hot areas around Phoenix. Instead, you’ll pass directly through Flagstaff which is a mountain town and where Northern Arizona University is located. The sights here are like a completely different world from everything you’ve seen so far, especially once you begin to head south right before passing into California. Oh, and because of the high speeds on the I-40, this will feel like one of those awesome car track days.

• California: Once you reach this point get ready to cruise through rolling hills, vineyards, orchards, stunning landscapes and then at Barstow you should begin smelling the sea. From San Bernardino and Pasadena to Santa Monica it’s simply breathtaking.

This is only a taste of the experience really. You’ve just got to get out and do it. There’s plenty of great resources online to keep you on track and if you have the time you don’t have to miss a thing. Enjoy!

Six students, including the gunman, were found in the quad suffering from gunshot wounds, Sheriff Alex Villanueva said at a news conference. All six were transported to hospitals, where two of them, a 16-year-old girl and a 14-year-old boy, were later pronounced dead.

The surviving victims were described as two girls, ages 14 and 15, and a 14-year-old boy.

In a tweet, Henry Mayo Hospital said it had received four patients.

Their names were not immediately disclosed. The sheriff said the deceased girl’s parents were at the hospital. He was notified of the second fatality during a press conference at the school.

Gunman turns .45 caliber on himself

According to sheriff’s Capt. Kent Wegener, surveillance video “clearly” shows the suspect pulling a semi-automatic handgun out of his backpack in the quad and shooting five classmates before shooting himself in the head.

Thursday was the gunman’s 16th birthday, the captain said.

He was listed in grave condition at a hospital, according to Villanueva.

In the immediate aftermath of the shooting, authorities released a description of the suspect as a manhunt got underway. Heavily armed deputies and an armored SWAT vehicle were seen at a home near the school, but it was unclear if the house was connected to the investigation.

The high school remained on lockdown for hours after the incident. Shortly before 11 a.m., lockdowns were lifted at all campuses in the district, as well as Rosedell and Highland elementary schools.

Central Park, at 27150 Bouquet Canyon Road, was being used as a reunification point for parents and students, the Sheriff’s Department said.

Undersheriff Tim Murakami tweeted an apology to parents, saying investigators need to interview “every student at Saugus HS” before they can be released.

In a statement, the White House said President Donald Trump was monitoring ongoing reports about the shooting.

“The White House encourages all those in the area to follow the advice of local law enforcement and first responders,” the statement said.

Gov. Gavin Newsom tweeted an expression of gratitude to the emergency responders.

“We simply should not have to fear for our kids’ lives when we drop them off at school,” the governor said. Addressing Senate Majority Leader Mitch McConnell, Newsom asked: “How many more lives will be lost? How many more shootings will we have to endure? We need commonsense gun reform. NOW.”

Amid the chaos at the scene, the number of reported victims fluctuated throughout the morning. The sheriff later confirmed that six people were shot, including the gunman.