Emirates airline has put a new twist on travel… airplane windows are to become a thing of the past.

Would you travel in a windowless plane?

Looking out a plane window is set to become a thing of the past, with revolutionary plans to change air travel forever. Apparently, it will be for our own good.

A major airline has unveiled the plane of the future – complete with windowless cabins.

Emirates Airline has debuted its new first class suite for the Boeing 777-300ER, which boasts virtual windows that link to the outside world with fibre-optic cameras. 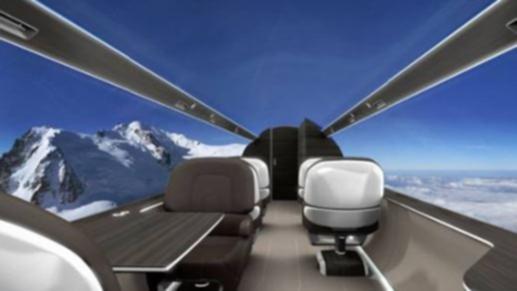 Fibre optic cameras will beam an image of outside onto the inside of the plane.

Removing the windows would make aeroplanes lighter and faster and reduce fuel consumption, he said.

“Imagine now a fuselage as you’re boarding with no windows, but when you get inside, there are windows,” Sir Tim told the BBC.

“Now you have one fuselage which has no structural weaknesses because of windows.”

“An aircraft could be very claustrophobic and for many, air travel is anxiety inducing already,” he said.

However, aviation safety expert Professor Graham Braithwaite said in an emergency it would be vital for cabin crews to be able to look outside the aircraft.

“An aircraft could be very claustrophobic and for many, air travel is anxiety inducing already,” he said.

The Civil Aviation Safety Authority (CASA)’s Peter Gibson said an important part of the in-flight safety briefing is to instruct passengers to ensure their window shades are up during takeoff and landing.

He said this is crucial in the event of an emergency.

“This is so the crew can see what’s happening outside the aircraft during an emergency landing,” Mr Gibson said.

“The optimum maximum time to evacuate an aircraft is 90 seconds. This is what the crew is trained to do. But you don’t want to be wasting time getting people to lift the blinds up.

“The crew needs to be able to quickly assess which side to evacuate the plane, for example if there is a fire, because every second counts.

“One clear issue [with windowless planes] is being able to visually assess what’s going on outside an aircraft – the situational awareness of what’s happening outside is critical.”

Related Topics:
Up Next

President Donald Trump played down the stock market’s losses on Tuesday as “peanuts” when compared with the importance of striking a good deal with China and the gains since his election.

“If the stock market goes up or down — I don’t watch the stock market. I watch jobs. Jobs are what I watch,” he added. Today’s move is “peanuts compared to — we have picked up record numbers so that’s OK. That’s the way I feel.”

The major stock indexes slid Tuesday after Trump said he thinks it would be a good idea to delay signing a trade deal with China after the 2020 presidential election. The Dow Jones Industrial Average fell more than 450 points at its lows on Tuesday, led lower by trade-vulnerable Apple, Caterpillar and 3M.

“In some ways, I like the idea of waiting until after the election for the China deal, but they want to make a deal now, and we will see whether or not the deal is going to be right,” Trump told reporters before U.S. markets opened Tuesday. When asked if he had a deal deadline, he added: “I have no deadline, no. … In some ways, I think it is better to wait until after the election if you want to know the truth.”

Despite his assurances that he doesn’t watch the market’s daily moves, Trump often tweets within hours of when the U.S. equity market reaches an all-time high. He has tweeted the keyword “stock market” 107 times since his inauguration

Ok so there’s always that time when you just wish so bad you could straight up say whats on your mind, but you know you really shouldn’t, so you don’t. Well leave it up to kids to say exactly what you’re feeling, no hesitation or regret. Check out these kids quotes that say everything you wish you could!

Why do kids say the darndest things? Comment with your favorite!

How to become a better businessman in 6 steps; Priceless advice from Entrepreneurs

Become a better businessman in 6 steps following this priceless advice from accomplished entrepreneurs.